How Technology Can Help Avoid Desensitization in Industrial Safety 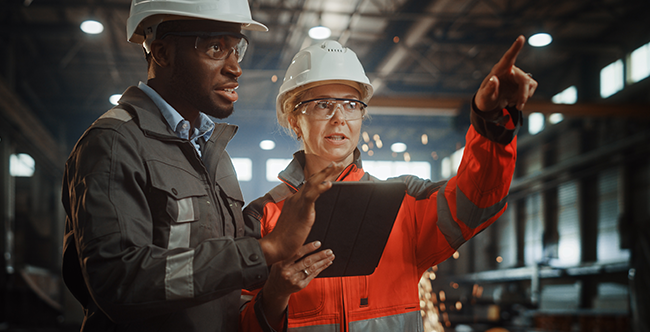 Desensitization is a dangerous word. Merriam-Webster defines desensitization, to make (a sensitized or hypersensitive individual) insensitive or nonreactive to a sensitizing agent. Imagine your afternoon commute home. Have you ever pulled into your driveway after work only to wonder how you made it home? It’s easy to go through the motions and mentally check out with something routine like an afternoon commute. Maybe you’re not as cautious about the traffic around you or the route because it’s something you do every day. You think to yourself I could drive this route with my eyes closed. But that’s when desensitization turns into a dangerous situation.

In Psychology, desensitization is used as a treatment or process that diminishes emotional responsiveness to a negative, aversive, or positive stimulus after repeated exposure to it. It’s useful in helping those who suffer from phobias, fear or anxiety. But within the safety realm, desensitization isn’t a good practice. We associate desensitization with someone who is too comfortable or too familiar with a task that results in a dilution of the potential risks. The word is often used when someone is so good at something(s) that he or she no longer has to think about it.

Industrial environments and construction sites will always contain some inherent hazards because of the nature of the work completed. Combine factors like repeated exposure to a job with added pressures of production goals or on-time completion of a project and the opportunity for injury greatly increases. Desensitization is often at the root of an accident, injury, or even fatality. For example, a worker is given the responsibility of a routine task and the more times he or she completes it – the more hazardous the task becomes. Over time, the risk associated begins to diminish to the worker because of his or her ill-gotten confidence. Sometimes this results in cutting corners or carelessness. Often, this condition is not fully recognized until after an incident or injury occurs, which for all practical purposes is too late.

But emerging technology can help avoid the hazard of desensitization in industrial safety.

Experienced workers recognize the risk for injuries associated with their work environment but ironically, these workers are more likely to become desensitized to these safety risks. Their thinking could be along the lines of, “I’ve been doing this job for more than 15 years and I know what I’m doing” or “I’m smart enough or experienced enough to avoid risky situations.”  But according to the most recent National Census of Fatal Occupational Injuries in 2019 released by the Bureau of Labor Statistics (BLS), workers age 55 and over accounted for 38% of all workplace fatalities, up from 20% in 1992. Given the shortage of skilled workers in construction and other industries, we need to help protect these valued human resources and thus we can’t afford to have workers being complacent about their personal safety or coworker’s safety on the job.

For the last decade, thinking surrounding safety has been very much reactive. Accidents, injuries, and fatalities are followed by an investigation. The root cause or findings from that investigation are often considered when the next accident happens. It’s a vicious cycle and this out-of-date approach only increases the chance of injury. But new technology allows us to proactively approach safety and avoid desensitization.

Technology like Everguard’s Sentri360® platform and ecosystem allow a safety program to prevent an accident before it happens. A multitude of sensors continuously monitor workers and equipment while the edge server analyzes millions of pieces of data. Within seconds of receiving data input, an intelligent decision is made by the platform. When a worker’s actions put him or her in a potentially dangerous situation, the worker receives an alert in under half-a-second so he or she can modify his or her actions to prevent injury or avoid an accident. At the same time, site safety and operations managers have access to alerts and data to provide behavior management and training. In the case of desensitization, this technology can track, report and prevent nonreactive behavior that could lead to injury.

For example, imagine a forklift operator with ten years of experience moving a large steel coil or load of any kind. The operator is well trained and has been working in this area for several years and becomes focused on the load and not his surroundings. As such, he doesn’t notice a distracted worker moving into the area. Before the worker walks too close to the truck or load in the process, computer vision cameras capture and collect data, analyze the data, recognize the potential hazard, and within seconds (at most), notify both the worker and the operator to STOP via a wearable device. Because of the routine nature of the task, the operator and the worker may have been distracted causing either or both to become unaware of their surroundings.

An important component in avoiding desensitization in industrial safety is through training. Regular reminders keep safety fresh on everyone’s minds and understanding the potential hazards in the workplace is a great place to start. Technology like Sentri360® not only prevents accidents, but it also collects data in the User Portal for future use such as training. Workers can see firsthand the infraction made and learn how to avoid making the same error in the future. This technology is extremely useful in helping safety professionals recognize trends and understand the areas that require coaching. Likewise, this technology can also be used to reinforce positive behaviors and actions through observations being evaluated 24/7/365. This data enables leadership to use “right behaviors” to reinforce and help to sustain the expectation of on-the-job safety.

Think back to the forklift operator, data collected in the User Portal could be used to help him brush up on best practices when operating mobile equipment.

The 2019 BLS report shows that 5,333 fatal workplace injuries occurred alone in 2019. This number is unacceptable. Especially when we consider the fact that many of these injuries could have been avoided with the technological advancements available today. Together with technology, every safety program can proactively approach safety, avoid accident-increasing epidemics such as desensitization and reach the ultimate goal: an accident-free workplace.

< Back to All Blog Posts